Amidst the challenges we face today, the Global Silent Minute is an opportunity to unite in thought, prayer, and meditation to create the future we imagine. The minute begins with the ringing of bells everywhere, as together we enter into one silent minute, calling on humanity to fulfill its highest potential and greatest destiny: peace on Earth.

The Global Silent Minute is inspired by the Silent Minute launched in WWII in London during the blitz as a call to citizens to unite daily in a silent minute for peace and freedom. Millions participated, and its success was acknowledged after the war as a “secret weapon” which the Germans could not counter. Today, our Global Silent Minute will be a powerful force in the creation of a better world.

The History of the Silent Minute

The Silent Minute was born from a conversation between two soldiers on the eve of a battle in the mountains around Jerusalem in the First World War. One knew he would not survive the war and prophesied the coming of an even greater conflict that would be fought out in every continent, ocean and air. He urged his comrade to provide an opportunity for him, and millions like him, to assist from the “other side”. He said: “Lend us a moment… each day and through your Silence gives us an opportunity. The power of Silence is greater than you know.”

The Silent Minute was instituted by his comrade, Major Tudor Pole O.B.E, during the London Blitz in 1940 as a moment to enter into Silence and, to provide a portal for cooperation with an “unseen but mighty army” in the subtle realms.

The Silent Minute called upon all citizens of the British Commonwealth nations and territories on land, sea and air to unite in thought – irrespective of philosophy or religion - in a Silent Prayer for Freedom and Peace. Every night on BBC radio, at one minute before the hour, the bells of Big Ben signalled the Silent Minute to begin at 9pm. Tudor Pole knew that if enough people joined in this gesture of dedicated intent, the tide would turn and the invasion of England would be diverted. Indeed, its success in bringing peace was acknowledged after the war by a high ranking German Officer who was quoted as saying:

“…you had a secret weapon for which we could find no counter measure and which we did not understand, but it was very powerful. It was associated with the striking of the Big Ben each evening. I believe you called it the ‘Silent Minute’.”

Ring the Bells and enter the Silence 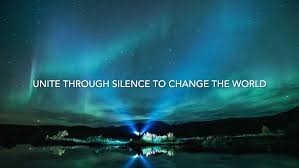 Let us ring a bell at one minute to 9.00pm London GMT on 21 December 2019 and on the hour join together with the Forces of Light in one minute of global, potent, cooperative Silence to create a better world for all.