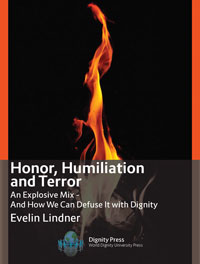 Honor, Humiliation, and Terror: An Explosive Mix – And How We Can Defuse It with Dignity

"Evelin Lindner is one of the most important, present-day actors for peace, international solidarity and conflict resolution, human rights and democracy building, and in this book she addresses the most burning issues of our time -- terrorism and the quest for a dignified world." -- Inga Bostad, Professor of Philosophy, Director, Norwegian Centre for Human Rights, University of Oslo, Norway

"Humankind has reached a boiling point. Violence, hatred, and terror have become deeply entangled with honor, heroism, glory, loyalty, and love. Over the past five percent of modern human history on planet Earth, roughly the past ten millennia, human activity has reached a crescendo of rapid and ruthless competition for domination, a fight for power over people and the planet, where "might" has become "right." Within this context, a dangerous culture of honor has evolved, in which destruction is mercilessly merged with love: “It is my duty, if I love my people, to heroically destroy our enemies and secure all resources for us,” underwritten by an ominous motto: "If you want peace, prepare for war."

"Humanity has haphazardly constructed an entire world-system on top of this merger, holding the whole world hostage through never-ending cycles of domination and humiliation. The consequence, today, is the ubiquitous destruction of human and environmental life on this planet. Terror and terrorism are the tools of a twisted honor system that should alert us to the mounting danger while we still have a window of opportunity for change.

"With this book, the author encourages us to recognize the immense historic opportunity that is open to us in the wake of these dangerous times. Drawing on 40 years of research gathered on her personal path of living globally, she calls us to action in service of restoring and replenishing the health of human arrangements of relationships, emphasizing the lifesaving necessity of mutually dignifying cooperation. When we overcome the legacy of honor and terror together, in mutual respect, we can address the social and environmental crises of our time and the terror these developments foment.

"This book is a breathtaking, globally informed account of how humanity can reverse the rising tide of terror, making dignity our destiny and legacy… before it is too late."

'Evelin Lindner has a dual education as a Medical Doctor and a Psychologist, with a Ph.D. in Medicine (Dr. med.) from the University in Hamburg in Germany, and a Ph.D. in Psychology (Dr. psychol.) from the Department of Psychology at the University of Oslo in Norway. She is the founding president of Human Dignity and Humiliation Studies (HumanDHS), a global transdisciplinary community of concerned academics and practitioners who wish to promote dignity and transcend humiliation around the world. Linda Hartling is the director of Human Dignity and Humiliation Studies. Lindner is also co-founder of the World Dignity University initiative, including Dignity Press and World Dignity University Press. All initiatives are not for profit. She lives and teaches globally, and is affiliated with the University of Oslo since 1997 (first with the Department of Psychology, and later also with its Centre for Gender Research, and with the Norwegian Centre for Human Rights). Furthermore, she is affiliated with Columbia University in New York City since 2001 (with the Advanced Consortium on Cooperation, Conflict, and Complexity, AC4), and since 2003 with the Maison des Sciences de l'Homme in Paris. She convenes two conferences per year together with the HumanDHS network, altogether 30 conferences have been conducted since 2003 all around the world. One conference takes place each December at Columbia University in New York City, it is the Workshop on Transforming Humiliation and Violent Conflict, with Morton Deutsch as honorary convener. The other conference takes place at a different location each year, since 2003 in Europe (Paris, Berlin, Oslo, Dubrovnik), Costa Rica, China, Hawai'i, Turkey, New Zealand, South Africa, Rwanda, and Chiang Mai in Northern Thailand. See for a list of past and future conferences. Lindner has received several awards and as a representative of the dignity work of HumanDHS, she has been nominated for the Nobel Peace Prize in 2015, 2016, and 2017.'