Mainstream modern economics, the stuff currently under offer at our universities’ business schools and economics departments the world over-describes individuals as having the objective of maximising utility. This is presented in an atomistic way with the focus being placed on consumption of goods and services.

Can this really be true? Can this teaching assist us to lead a good, worthwhile and happy life?

The answer is a profound NO, as the findings of a recently published study so clearly shows. It only makes sense that “a materialistic outlook, which looks for satisfaction in what one does not have, would impair the ability to be grateful for what one has now.”

Let us picture the most materialistic people you know. They don’t seem very happy, do they? They certainly have more stuff than most of us, and we’re constantly bombarded with messages that equate stuff with bliss. So what’s missing from their lives?

“High materialists are less happy in part because they find it harder to be grateful for what they have,” writes a research team led by BaylorUniversity psychologist Jo-Ann Tsang. The researchers argue that, because of this low level of gratitude, “basic psychological needs (which allow) individuals to thrive” go largely unmet.

Writing in the journal Personality and Individual Difference*1, Tsang and her colleagues describe a study in which 246 college students took a multifaceted survey. First, their level of materialism was measured by their response (on a scale of “strongly agree” to “strongly disagree’) to such statements as “My life would be better if I owned certain things I don’t have.”

Their dispositional gratitude and overall life satisfaction were determined by their reaction to two more sets of statements, such as “I have so much in life to be thankful for.”

In addition, the researchers measured the extent to which the participants’ basic psychological needs—specifically, relatedness, competence, and autonomy—were being met. Again using a scale of “strongly disagree” to “strongly agree,” the students responded to statements including “I felt a sense of contact with people who care for me, and whom I care for.”

“As in past research, we found that materialism was negatively associated with well-being,” the researchers write. Then, breaking new ground, they add that their results suggest one major reason for this is likely “the decreased gratitude that high materialists experience, and the resultant decreases in basic psychological needs.”

There are several theories regarding why materialistic people feel less gratitude. As the researchers note, it only makes sense that “a materialistic outlook, which looks for satisfaction in what one does not have, would impair the ability to be grateful for what one has now.”

Such people can get caught in a negative spiral in which they have unrealistic expectations of how happy material goods will make them. When their experience falls short of those expectations, their instinct is to seek out something new to purchase, putting them in an endless loop of anticipation and disappointment that does not leave room for gratitude.

And that, the researchers add, is a big loss. “Gratitude seems to confer robust benefits for well-being,” Tsang and her colleagues write. They argue that gratitude is very likely related to feelings of competence and autonomy, and is definitely related to a sense of social connectedness.

The research “suggests a number of potential intervention points for increasing life satisfaction in individuals who are high in materialism,” the most obvious one being encouraging feelings of gratitude, perhaps by keeping a “gratitude diary.”

But however one goes about it, the key seems to be a willingness and ability to shift one’s focus from fretting about what they desire “to savoring and appreciating what they do have.”*

To sum it all up, it appears that materialists are likely to have “unmet psychological needs”. Lower satisfaction is likely to arise because, among other things, materialism is associated with loneliness, depression, low self-esteem, and less involvement in community events.**

*1Why are materialists less happy? The role of gratitude and need satisfaction in the relationship between materialism and life satisfaction

Now, what is the moral of this story? If we want a happier, more peaceful and more contented individuals and world, then, the academic economists must change what they preach.

I, for one, have made that change. I can, from a very deep personal experience, suggest to my fellow economists that if you truly want to change the world for the better, then, you should grasp the nettle and explore the relevance of ethics, morality, spirituality, love, compassion, sympathy, empathy, altruism, volunteerism, and in all, the common good to the functioning of the economy. As long as our subject is trapped within the narrow confines of individualism, self-interest, greed, profit maximisation, cost minimisation, and all that jazz, we cannot heal our broken world. ‘Each man for himself and the devil take the hindermost’ has bankrupted and turned our discipline into a ‘dismal’ science. By going back to our roots, by binging economics closer to ethics, spirituality, and philosophy, we can, once again, make economics a subject of ‘harmony and beauty, all its parts co-operating for the common good’. 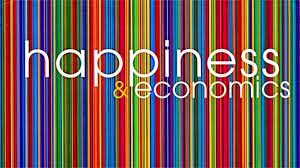 Let us make sure our students will have a much better life than those noted below:

On the relationship between money, rat race, success and happiness

Enough money is surely good, But too much of it, that’s another story

“I have learned to seek my happiness by limiting my desires, rather than in attempting to satisfy them.” JOHN STUART MILL

All these men learned well the art of making money but none of them learned how to live, commented the original compiler of this list.'

Below I have noted a few links on my journey to change and on what I have learnt. Hope they will be inspiring for your journey of change.

Transforming Lives for the Common Good: From Consumerism to Sustainability