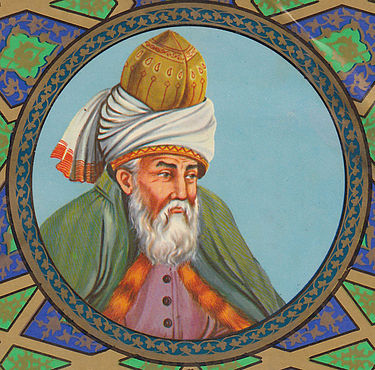 A few years back, when I came to realise that there was something amiss with much of the things that I had learnt about Western modern economics, it was Rumi and other Persian sages such as Sa'adi and Hafez who came to my assistance in founding Globalisation for the Common Good Initiative, to bridge the divide between East and West, and to enable me to connect my intellect and my humanity.* They enabled me to discover life’s bigger picture, beyond profit maximisation, cost minimisation, the so-called market forces, privatisation, deregulation, and free trade and more. For that I cannot be grateful enough.

Rumi was born on 30th of September 1207 in Balkh in today’s Afghanistan, then within the domains of Persian Empire, and died in Konya, in present-day Turkey where he spent many years of his precious life.

Molana Jalal-e Din Mohammad Balkhi, commonly known as Rumi, was a Persian philosopher and mystic of Islam. His doctrine advocates unlimited tolerance, positive reasoning, goodness, charity and awareness through love. Rumi has been hailed by western scholars as the greatest mystical poet of all time.

Prof. Coleman Barks who has translated many of Rumi's works into English and has played a central role in making the Sufi mystic Rumi one of the most popular poets in the world, has noted that, "The words that came so spontaneously carry a broad range of religious awareness: the meditative silence and no-mind of Zen, the open heart and compassion of Jesus, the stern discipline of Muhammad, the convivial humor of Taoists, the crazy wisdom and bright intelligence of the Jewish Hassidic masters. Rumi is a planetary poet, loved the world over for the grandeur of his surrender and for the freedom and grace of his poetry. He was nurtured within the Islamic tradition, the Persian language, and a long line of Sufis, but it is his connection with Shams of Tabriz that lets his work transcends definition and doctrine. The poetry feels as though it belongs to all". For Rumi above all, love is the religion, and the universe is the book. He wrote: "The religion of love is apart from all religions. For lovers the only religion and creed is God", or "The lamps are different, but the Light is the same: it comes from Beyond".

When Rumi asks Shams: And where is the ladder on which I may climb to heaven? Shams replies: it's love. Learn to love. Earthly loves are mere shadow of Divine Love. Seek the love that cannot be caged by words. Shams taught Rumi absolute love for the Divine. God is the beloved, the devotee the lover. All that matters is love. Such a vision is sorely needed to heal today’s increasingly violent and divided world.

Now I want to share with you my favourite poem by Rumi, very relevant and timely, given today's world situation.

What is to be done, O Moslems? For I do not recognise myself.

I am neither Christian, nor Jew, nor Gabr, nor Moslem.

I am not of Nature’s mint, nor of the circling heaven.

I am not of earth, nor of water, nor of air, nor of fire;

I am not of the empyrean, nor of the dust, nor of existence, nor of entity.

I am not of India, nor of China, nor of Bulgaria, nor of Saqsin.

I am not of the kingdom of ’Iraqian, nor of the country of Khorasan

I am not of this world, nor of the next, nor of Paradise, nor of Hell.

I am not of Adam, nor of Eve, nor of Eden and Rizwan.

My place is the Placeless; my trace is the Traceless;

’Tis neither body nor soul, for I belong to the soul of the Beloved.

I have put duality away; I have seen that the two worlds are one;

I am intoxicated with Love’s cup, the two worlds have passed out of my ken;

If once in my life I spent a moment without thee,

From that time and from that hour I repent of my life.

If once in this world I win a moment with thee,

I will trample on both worlds; I will dance in triumph for ever.

Finally, I have to give a further thanks to Rumi: it was through studying Rumi that I came to discover and get to know, Saint Francis of Assisi (1182-1226), perhaps the most beloved saint of the Western world. There are accounts that St Francis while in the Middle East was in contact with Rumi’s mentor and the source of many of his inspirations, Shams Tabriz. Rumi and St Francis, the great names in Abrahamic mysticism, are thus given a point of contrast which reflects their spiritual unity.

Much like Rumi, Francis of Assisi adored The Creation. Trees and animals would bow with reverence when he passed by. Saint Francis, like Rumi also loved to help all beings at whatever stage and in whatever difficulties they found themselves. He, too, loved to see people and animals happy and at peace with their lives and with God.

Below I wish to share with you a great prayer by St Francis which like Rumi’s poem quoted above has had a major impact on me. In this prayer we can clearly see the resemblance of Shams’s advice to Rumi on the true meaning of love and how St Francis has also similarly reflected on it.

O Master, grant that I may not seek so much to be consoled as to console;
to be understood as to understand;
to be loved as to love.

May this prayer and the poem above be a source of inspiration to all those who are working to change the world for the better. In all, when I am inspired by something so powerful, I feel renewed in my hope for this world that has long turned in the darkness of greed, anger, revenge, fear, confusion, and pain. In conclusion and summing up, what more can I say, but to quote another poem of Rumi:

Outside ideas of right doing

There is a field

I'll meet you there.

The Story of the GCGI: Why Love, Trust, Respect and Gratitude Trumps Economics: Together for the Common Good

"Jewel of Love" is a very beautiful mystical poem by Rumi about "Divine Love" with English subtitles! An eternal fire that connects us all regardless of our race, religion and beliefs. Wishing all infinite love in every passage of your lives.

And now hear Saint Francis of Assisi: Lord, make me an Instrument of Your Peace (in Italian and English)

The life of Rumi

The Sufis and Francis of Assisi