Thank you Archbishops for speaking truth to power 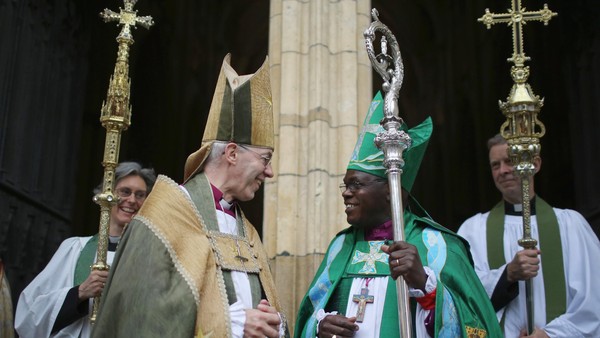 ‘In a direct and unapologetically “political” intervention timed for the beginning of the General Election campaign, the Archbishops of Canterbury and York, warn party leaders are selling a “lie” that economic growth is the answer to Britain’s social problems.

‘Britain, they argue has been “dominated” by “rampant consumerism and individualism” since the Thatcher era, while the Christian values of solidarity and selflessness have been supplanted by a new secular creed of “every person for themselves”...

It saddens me to note that for what they have said, the Archbishops have been subjected to the usual attacks: they are a bunch of Marxist, leftist, speaking above their stations. They should stick to spirituality and love! Encouraging their parisioners to accept life’s hardship, as for sure they will have a better life in Paradise later on! Letting the 1% off the hook!

You know, I have a great deal of sympathy for the Archbishops. The attack on them, reminds me so much of the attack on me all those years ago, when I changed from an ‘economist as usual’ into ‘an economist for the common good’. I, too, was attacked for my work to bring humane values into interaction with modern economics. I was told if I cannot remain a “good” economist, then, I should consider become a priest, or perhaps a social worker!

But now we know better: the “good” economists who gave us the September 2008 crises and destroyed hope and the world in the process.

Thus, a big thank you to the Archbishops for speaking truth to power. Ignore all those that are criticising you for being “political”. They only tolerate you and the church as long as you talk about poverty, but not about the reasons for it. They want you to be apolitical. However, in the eyes of the people and in the face of so much inhumanity, injustice and inequality, to remain apolitical equates to being amoral.

As I travel across our country and engage in dialogue with many people from different walks of life, I know that they want to hear an account of why there is so much suffering in this world? Why there exists such a sickening level of abject poverty and inequality in and within nations? Why there is such a level of global mistrust and injustice? Why there is so much environmental degradation? Why are we told there is not enough money for education, health, sanitation, drinking water and social services, but there is always plenty for military expenditures and waging wars?

I wish to thank the Archbishops and the church for highlighting these and other questions and encouraging us all to think more carefully about socio-economic, political, and environmental issues and their relevance to our daily lives. These matters are too important to be left to politicians only!

Those who have attacked the Archbishops for what they have said, are those with something to hide. Their agenda is to carry on exploiting the 99%, as they have done so since the Thacher era.

“Like the Old Testament prophets, I suggest, it is essential for us to speak truth to power”. Thank you Archbishops for doing so. It is no good to talk about love and the common good, without explaining how these values can change the world for the better, and how they should be incorporated into all we do.