Will Hutton writing in today’s Observer about the heavy fines imposed on the banks for fiddling the foreign exchange markets, has, in my view, very wisely noted that:

Our grandparents were wiser about markets than today’s economists and regulators.

However, the big question is to ask “WHY” this may be the case.

The answer in my mind is very easy: They did not have PhDs and MBAs from the so-called “Prestigious” universities and business schools, where they believe there is no correlation between ethics, economics and business*. Our grandparents were not brainwashed by academics that have never been to a market, a bazaar, but pretend to know it all, telling students how the markets work!

I vouch for this based on profound personal experience.

As a young boy, I recall all those years ago in the 1960s when during the summer holidays I used to go with my late father to his office in Tehran’s Grand Bazaar, the largest market of its kind in the world, where most of my family had major businesses.

Billions of dollars exchanged hands every year: imports, exports, foreign exchange and much more, all in the Bazaar in Tehran. 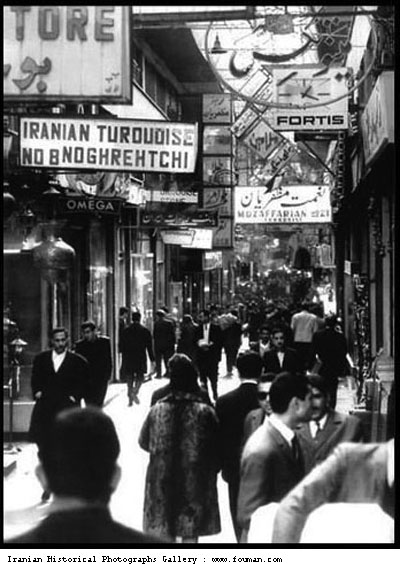 *In this photo I can see  a few of my dad's  cousins' jewllery shops, Muzaffarian and Noghrechi

You know, hardly any of these skilled businessmen, traders, had high school diplomas, let alone university degrees. They hardly had any insurance for anything, or ever a need for lawyers, litigations, etc, to solve any dispute. They were men of honour and dignity, trusting each other. Their words were their contracts. Their contracts were their honour. They were educated on the job. They had all risen through ranks, starting as apprentices at a very young age.

They practiced what they preached. They had the same values at home as they had at the Bazaar too. They knew the common good.  They were not, like today’s CEOs, with double personalities: One for home and another one for the market!

Yes, this is where we have gone wrong, confusing today’s so-called education with wisdom and knowledge, where in fact it is nothing of the sort. And we are all paying a very heavy price for this, when we pay 10s of 1000s of £ and $ to go to university, get an MBA and then go to the banks and destroy the world.

*To reflect more fully on the points raised in this Blog, I very much recommend you to read the text of a lecture I gave at London School of Economics on Wednesday 20 May, 2015. The lecture was at the invitation of the World Congress of Faiths:

Criminal bankers have brazenly milked the system. Let’s change it | Will Hutton | Comment is free | The Guardian