A Path to Happiness- A Perspective from Leo Tolstoy 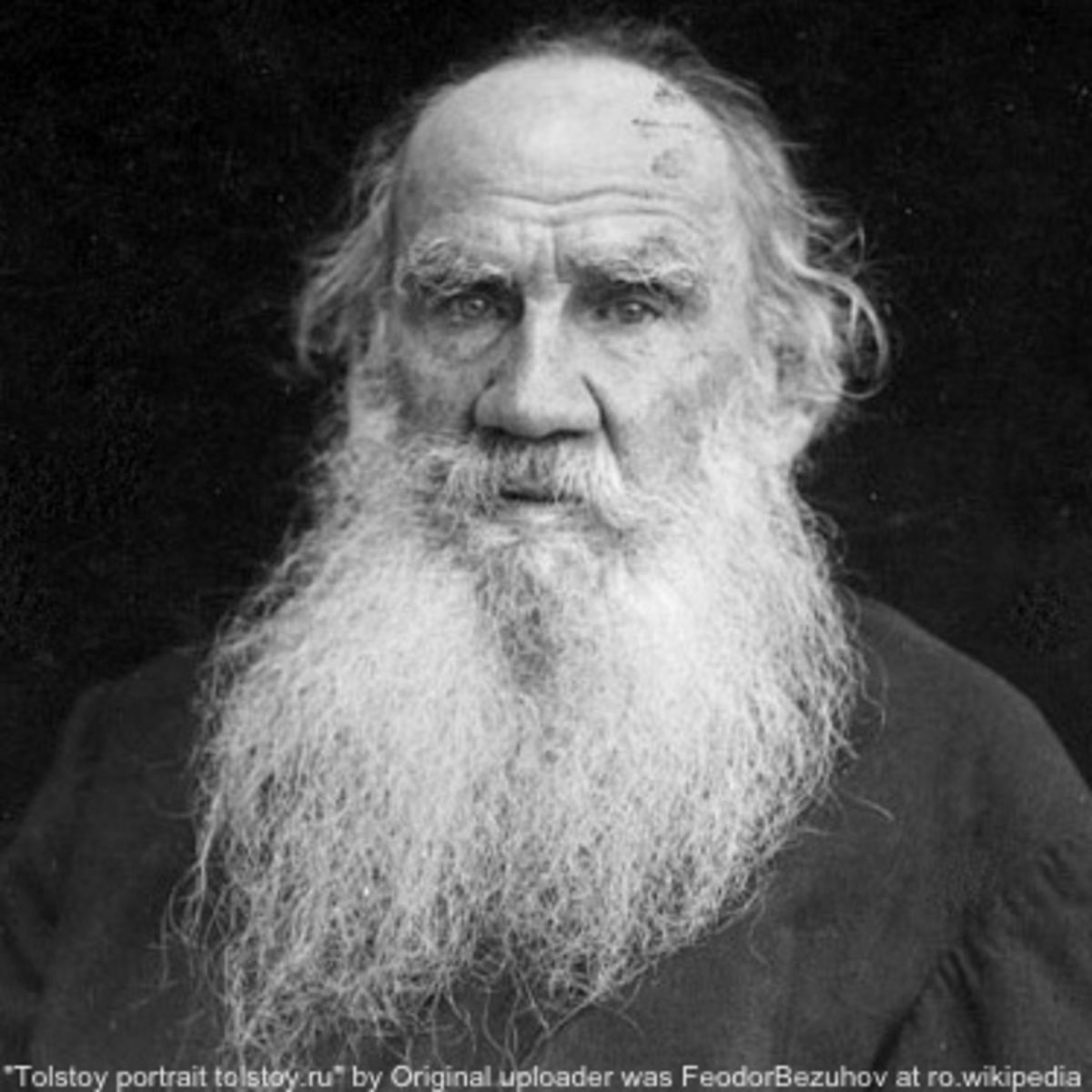 Count Lev Nikolayevich Tolstoy, usually referred to in English as Leo Tolstoy, was a Russian writer who is regarded as one of the greatest authors of all time.

Born to an aristocratic Russian family in 1828, he is best known for the novels War and Peace (1869) and Anna Karenina (1877), often cited as pinnacles of realist fiction. He first achieved literary acclaim in his twenties with his semi-autobiographical trilogy, Childhood, Boyhood, and Youth (1852–1856), and Sevastopol Sketches (1855), based upon his experiences in the Crimean War. Tolstoy's fiction includes dozens of short stories and several novellas such as The Death of Ivan Ilyich, Family Happiness, and Hadji Murad. He also wrote plays and numerous philosophical essays.

In the 1870s Tolstoy experienced a profound moral crisis, followed by what he regarded as an equally profound spiritual awakening, as outlined in his non-fiction work A Confession. His literal interpretation of the ethical teachings of Jesus, centering on the Sermon on the Mount, caused him to become a fervent Christian anarchist and pacifist. Tolstoy's ideas on nonviolent resistance, expressed in such works as The Kingdom of God Is Within You, were to have a profound impact on such pivotal 20th-century figures as Mohandas Gandhi and Martin Luther King, Jr. (From Wikipedia, the free encyclopedia) 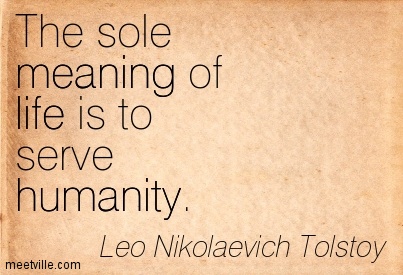 “The secret to a happy life - courtesy of Tolstoy”

“Tolstoy, who was born in 1828 and died in 1910, was a member of the Russian nobility, from a family that owned an estate and hundreds of serfs. The early life of the young count was raucous, debauched and violent.

"I killed men in wars and challenged men to duels in order to kill them," he wrote. "I lost at cards, consumed the labour of the peasants, sentenced them to punishments, lived loosely, and deceived people…so I lived for ten years."

But he gradually weaned himself off his decadent, racy lifestyle and rejected the received beliefs of his aristocratic background, adopting a radical, unconventional worldview that shocked his peers. So how exactly might his personal journey help us rethink our own philosophies of life? 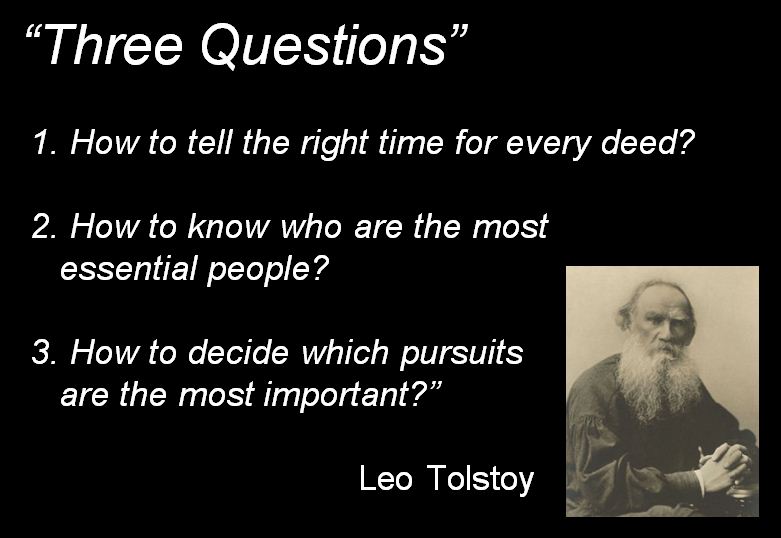 One of Tolstoy's greatest gifts was his ability and willingness to change his mind based on new experiences. The horrific bloodshed he witnessed while fighting in the Crimean War in the 1850s turned him into a lifelong pacifist. In 1857, after seeing a public execution by guillotine in Paris - he never forgot the thump of the severed head as it fell into the box below - he became a convinced opponent of the state and its laws, believing that governments were not only brutal, but essentially served the interests of the rich and powerful. "The State is a conspiracy," he wrote to a friend. "Henceforth, I shall never serve any government anywhere." Tolstoy was on the road to becoming an anarchist. He would be the first to encourage us to question the fundamental beliefs and dogmas we have been brought up with.

Tolstoy displayed an unusual capacity to empathise by stepping into the shoes of people whose lives were vastly different from his own. In the 1860s, he not only adopted peasant dress but began working alongside the newly emancipated labourers on his estate, ploughing the fields and repairing their homes with his own hands. For a blue-blooded count, such actions were nothing short of remarkable. Although no doubt tinged with paternalism, he enjoyed the company of peasants and consciously shunned the literary and aristocratic elite in the cities. Tolstoy believed you could never understand the reality of other people's lives unless you had a taste of it yourself.

He also distinguished himself from his upper class peers by taking practical action to alleviate other people's suffering, most evident in his famine relief work. After the crop failure of 1873, Tolstoy stopped writing Anna Karenina for a year to organise aid for the starving, remarking to a relative: "I cannot tear myself away from living creatures to bother about imaginary ones." His friends and family thought it was crazy for one of the world's finest novelists to put one of his works of genius on the backburner. He did it again following the famine in 1891, spending two years working in soup kitchens and fundraising. Can you imagine a bestselling author today setting aside their latest book to do humanitarian relief work for two years?

4. Master the art of simple living

Following a mental breakdown in the late 1870s, Tolstoy rejected all organised religion, including the Orthodox Church he had grown up in. He adopted a revolutionary brand of Christianity based on spiritual and material austerity. He gave up drinking, smoking, and became a vegetarian. He also inspired the creation of utopian communities of simple, self-sufficient living, where property was held in common. These "Tolstoyan" communities spread around the world and led Gandhi to found an ashram in 1910 named the Tolstoy Farm.

This new, simpler life was not without its struggles and contradictions. Tolstoy famously preached universal love yet was constantly fighting with his wife. Moreover, the apostle of equality was never able to fully abandon his wealth and privileged lifestyle. He lived until old age in a grand house with servants. But in the early 1890s he managed - against his family's wishes - to relinquish copyright to a huge portion of his literary works, in effect sacrificing a fortune. Given the privileged position in which Tolstoy started his life, his personal transformation, if not complete, still deserves our admiration.

Tolstoy recognised that striking a balance between mind and body was an essential part of his creative process. He not only regularly put down his pen to guide a horse-drawn plough across the fields, but kept a scythe and saw leaning up against the wall next to his writing desk. In his last years, when writers and journalists came to pay homage to the bearded sage, they were always surprised to find one of the world's most famous authors huddled over his cobbling tools making a pair of boots. If Tolstoy were here today he would no doubt suggest we get some craft into our lives rather than grant so much of our leisure time to tweeting and texting.

The most essential life lesson to take away from Tolstoy is to follow his lead and recognise that the best way to challenge our assumptions and prejudices, and develop new ways of looking at the world, is to surround ourselves with people whose views and lifestyles differ from our own. In Resurrection, he pointed out that most people - whether they are politicians, businessmen or thieves - "instinctively keep to the circle of those people who share their views of life and their own place in it". Cosseted within our peer group, we may think it perfectly normal and justifiable to own two homes, or to oppose same-sex marriage, or to bomb countries in the Middle East. We cannot see that such views may be perverse, unjust, or untrue, because we are inside circles of our own making. The challenge is to spread our conversational wings and spend time with those whose values and experiences contrast with our own. Our ultimate task, Tolstoy would advise us, is to journey beyond the perimeters of the circle.” 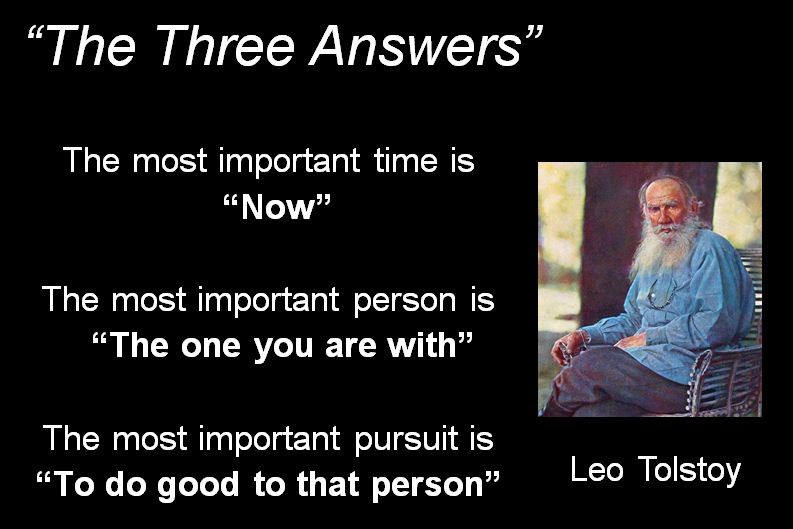 *Roman Krznaric is the author of The Wonderbox: Curious Histories of How to Live, on which this article is based - he is founder of the EmpathyMuseum and the digital Empathy Library

The above article was originally published in Magazine on bbc.co.uk on 1 January 2016

The secret to a happy life - courtesy of Tolstoy - BBC News

Only those live who do good.

Let us forgive each other- only then will we live in peace.

Happiness does not depend on outward things, but on the way we see them.

In the name of God, stop a moment, cease your work, look around you.

The two most powerful warriors are patience and time.

Boredom: the desire for desires.

It is amazing how complete is the delusion that beauty is goodness.

Truth, like gold, is to be obtained not by its growth, but by washing away from it all that is not gold.

The sole meaning of life is to serve humanity.

Without knowing what I am and why I am here, life is impossible.

Life is everything. Life is God. Everything changes and moves and that movement is God. And while there is life there is joy in consciousness of the divine. To love life is to love God.

And all people live, not by reason of any care they have for themselves, but by the love for them that is in other people.

Patriotism in its simplest, clearest, and most undoubted meaning is for rulers nothing else but a means of realizing their ambitions and venal ends; for the governed it is a renouncing of human dignity, intelligence, and conscience, and a slavish submission to the rulers. Wherever patriotism is championed, it is preached invariably in that shape. Patriotism is slavery.

Christianity, with its doctrine of humility, of forgiveness, of love, is incompatible with the state, with its haughtiness, its violence, its punishment and its wars.

Seize the moments of happiness, love and be loved! That is the only reality in the world, all else is folly.

I sit on a man's back, choking him and making him carry me, and yet assure myself and others that I am very sorry for him and wish to ease his lot by all possible means -- except by getting off his back.

Our Christmas Message: A time to open our hearts

In Praise of Gratitude