Reviewed and Updated on 6 October 2020 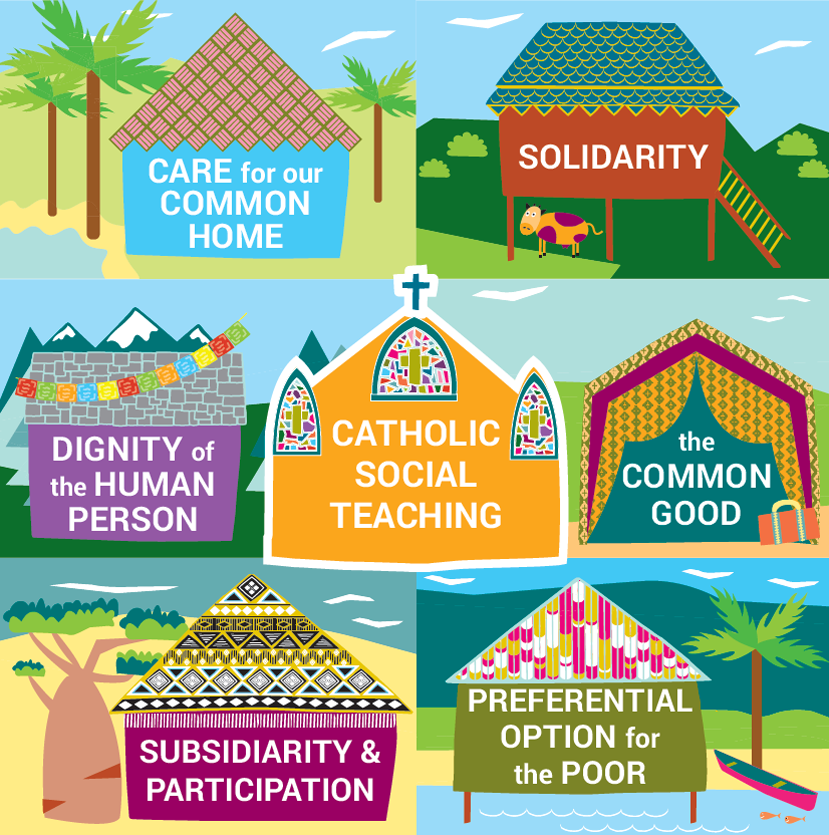 ‘The usual view among Catholics is that public authority should look after all aspects of the common good. As a result, the social encyclicals have proposed a variety of responsibilities for government. The variety has grown with the range of problems under consideration, from the condition of industrial workers in Rerum Novarum to the comprehensive good of all humanity and even the natural world in more recent encyclicals.’

In the early 2000s I was studying Pastoral Theology at Plater College in Oxford. It was there that I was introduced to Catholic Social Teaching, and it was there that  I remember first reading, RERUM NOVARUM, or Laborem Exercens, or GAUDIUM ET SPES  and being amazed how good and meaningful they were.

Moreover, I was equally amazed to note how relevant and how practically they related to my own economics, environmental and ecological views and values. Though, I must admit, there remain issues and values that still need to be reconciled somehow.This is a story for another day and time.

I was so impressed by these ENCYCLICALs and other related documents and teachings that I went on and wrote two books on what I had learnt at Plater College. Furthermore, it was also at Plater that our GCGI Conference Series was inaugurated.

It seems as a result of the recession, global austerity and the Occupy movement there is currently an increased interest in Catholic Social Teaching as a framework for ethical business and economics.

A new zeitgeist is capturing business people, academics and political players from both the Left and Right, looking for an ethical alternative for our time. Their inspiration? Catholic teaching.

In many ways these are difficult times for the Catholic Church. Congregations in England are still in decline, child abuse scandals around the world have cast a long shadow and in many areas of policy - from euthanasia to gay marriage - the church's fixed positions make it sound outdated and out of touch.

Yet in the last couple of months I have received some intriguing invitations from Catholic friends: one to an event on business ethics organised by Catholic bishops and featuring some of our most high-profile corporate leaders.

Another to a discussion of the progressive values after the credit crunch with prominent Labour advisors and Catholic theologians.

The common thread running through these events is a set of ideas going under the name "Catholic Social Teaching".

Compassion for the poor

I set out to understand more about these ideas, to find out why they are engaging so many different groups of people right now, and whether their current influence is likely to make any substantive difference to policy or politics.

Although its roots can be traced back not just to the Bible, but to the ideas of Aristotle, rediscovered in the 13th Century by St Thomas Aquinas, the modern expression of Catholic Social Teaching came in an encyclical - the highest form of papal teaching - titled Rerum Novarum and issued in 1891 by Pope Leo XIII.

The Pope offered the "gift" of Catholic social thought to a troubled world.

He called on the one hand for compassion for the poor and respect for the dignity of labour and, on the other hand, for respect for property and the family - all held together by the core idea of the common good.

The encyclical can be seen as the Church both realigning itself towards the concerns of the urban working-class, but also seeking to find a path of reform as an alternative to the growing threat of revolutionary unrest.

These origins offer one explanation for the current revival of interest in these ideas. For today too we live in a time of rapid change and social unrest.

Just this week a report from the Resolution Foundation predicts a further decade of stagnant living standards in the UK - a pattern shared with the US and most of Europe.

With austerity also stalking these countries, it is not surprising that various forms of anti-capitalist sentiment - of which the Occupy movement is the most high profile - have moved from the margins to the mainstream.

For Jon Cruddas, Labour MP for Dagenham and Rainham and the man charged by Labour leader Ed Miliband with writing his party's general election manifesto, his focus is on the philosophical and ethical critique of free market in the wake of the credit crunch:

"When the music stops in autumn 2008… you sort of search for different traditions to reintroduce them. Different bodies, frameworks, ideas," he explains.

"One of which is Catholic Social Teaching, which I think is a rich theme in order to analyse the contemporary situation."

But as Cruddas also recognises, the issues raised go wider and deeper.

In questioning not just the power of the market, but also the reach of the state, Catholic Social Teaching - updated in the light of the financial crisis in Pope Benedict's 2009 encyclical Caritas in Veritate (charity in truth) - plays into a new strand of communitarianism reflected in the rise of Maurice Glasman's concept of Blue Labour, Philip Blond's advocacy of Red Toryism and even aspects of David Cameron's rather troubled Big Society programme.

Catholic Social Teaching is not just about the ends of social reform, it is also about the means. Its emphasis on change, from the community upwards, means its influence reaches down to street level.

One of the new enthusiasms of the political class is for the old tradition - now updated in organisations like Citizen UK - of community organising.

Neil Jameson, a Quaker, is executive director of Citizens UK and he told me Catholics participating in campaigns on issues like the Living Wage and migrants rights were uniquely inspired by their church's social teaching. He even described their attitude as "joyful".

Here lies a tension which may be as crucial to the impact of Catholic Social Teaching as the inhibitions of the political class. Prof Linda Woodhead has just led a £12m government funded research programme on religion and society.

She argues that the Catholic Church is going through an "uncomfortable process" with "semi-democratisation in their own institutions, the clergy ceding much more control to laypeople, to the ordinary rank and file.

"But the clergy have still got their very traditional role of being the spokespeople and being the leaders," she adds, "so how do they let the laypeople help them develop Catholic social teaching, for example, or reform businesses or whatever and not cede their own authority?"

This might help to explain an answer I received from the Archbishop of Westminster Vincent Nichols - head of the Catholic Church in England and Wales.

I asked him how he would feel if political party leaders started quoting Catholic Social Teaching. Amused by the very idea, he says: "I'd probably think it's opening up a hornet's nest."

It is no surprise that the archbishop sees the strength of the Church lying in religious conviction and not political popularity.

He also knows that while Labour figures like Jon Cruddas and Maurice Glasman may be keen on certain aspects of Catholic thought, they are not rushing to champion the church's views on individual morality - views which are much less open to interpretation than its social analysis.

Catholic Social Teaching is a doctrine well-suited to today's quest for more ethical businesses, a less overbearing state and a more vibrant and cohesive civil society.

Now, as in 1891, many fear we will not be able to adapt to profound change without dangerous social upheaval. It may not provide easy or even practical answers right now, though it does, at least, seem to be grappling with the right questions.

And for those of us tired of the ritual adversarialism and technocratic wrangling on show in Westminster, there is something rather inspiring about the response of a shrewd operator like Jon Cruddas.

When I ask him whether the ethical foundations of Catholic Social Teaching imply a different way of thinking about politics, he says: "Yes, I do and I see them in different parties. It's going to be uncomfortable, difficult, but it means that we have to focus on almost transcending the formal architecture of politics in the national good."- *This article by Matthew Taylor was first published on the BBC on 5 November 2012.

My Twenty Years learning about Catholic Social Teaching: Reflections on Then and Now

It is now nearly eight years since I had posted ‘Catholic Social Teaching: A New Socioeconomic Zeitgeist?’. A lot of things have happened since, and I must admit that I am delighted to see that Pope Francis, inspired by  Catholic Social Teaching and the Common Good, has very effectively and positively risen to these challenges , showing us how to confront these emergencies of our times.

For example, as Phil Kingston,  writing recently  in Tikkun has eloquently noted:

‘An ongoing plea of Francis is that we listen to both the cry of the earth and the cry of the poor. These two cries are incorporated in Catholic Social Teaching as care of the earth and the common good. I have long regarded his two major statements of these issues in Evangelii Gaudium (Joy of the Gospel) 2013 and Laudato si (Praise be! Care of our Common Home) 2015 as complementary, with the former focussing primarily upon the common good and the latter upon care of the earth.’

Furthermore, as an avid critique of the global market economy, free trade, and the inhumanity of the current global economic ideology of neolibaralism, leading to the degradation of nature and our sacred earth, I have been greatly influenced and inspired by Pope Francis’ lectures, addresses, and Encyclicals.

Below, it is my pleasure to share some of them with you:

A reflection on ‘Evangelii Gaudium’, Apostolic Exhortation of Pope Francis

Pope Francis to global elite: Do more for the poor and take action in the interest of the common good

Love and the common good to heal the wounds of the coronavirus crisis: Pope Francis

Unbridled capitalism is the 'dung of the devil'- Pope Francis

Theology, Philosophy, Ethics, Spirituality and Economics: A Call to Dialogue

The Pandemic and the forgotten Love Story

The Case for Degrowth: It is urgent, necessary, and greatly needed for our survival

Books for the Common Good

My Ten Steps to a Better Life in a ‘Degrowth’ Economy