The Mad, Bad Economist and his Mumbo Jumbo Curve of Destruction

It is Our Responsibility and Duty to Highlight The Destructive Ways and the Falsehood of the Neoliberal, Thatcheroreagonomics and Economists

What we teach our students in the name of economics must change.  It must change if it is to play a constructive role in solving the multiple and multi-dimensional crises that so engulf our world, our species, the fabric of human community, relationship, and the web of life.  We are running out of time.  If our field does not change, if we do not revisit the rich and fertile soil in which our field was born, that being moral philosophy amid the broader questions of human existence, meaning, and ecology, then not only will we have retreated from the chance to play a constructive role in solving these crises, we will inherit well deserved scorn and contempt.  The opportunity is upon us.  Let us seize it.  Carpe Diem!

From Reagan to Trump and from Thatcher to Truss, these here today, gone tomorrow destroyers had one thing in common:

They all believed  in the by now discredited and humiliated supply-side economics, the idea that if you cut taxes for the super rich, this will result in economic growth and in turn will lead to trickle down economics, spreading money, wealth and happiness to the poor souls way down the ladder, and then, everybody will benefit from the spending and consumption by the ‘benevolent’ super rich!!

These short-sighted politicians, amongst others, it seems, were made fools of and looked ridiculous by a few mad, bad economists, amongst them, the maddest of them all, Art Laffer, ‘godfather’ of supply-side economic theory and his bloody useless curve!

He became known as the “godfather” of Reaganomics, whilst Slate has dubbed him 'World’s Worst Economist'. He has also been called the key part of the “Intellectual Rot of the Republican Party”.

Laffer was beloved by Trump who on Laffer’s advice cut taxes for the super rich and in the process increased the federal deficit by $2tn , bringing misery to many for the benefit of a few. Then, Trump Gives World’s Worst Economist the Presidential Medal of Freedom to a man who has done, like Trump himself, the most damage to America’s understanding of economics, humanity and civility. 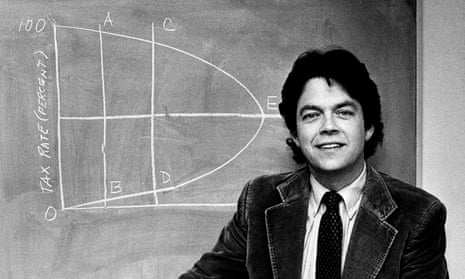 'Art Laffer’s career has been heavy on punditry, light in academic rigor, and absolutely destructive for the average American and the long-term health and sustainability of our economy'. Photo: AP/Via The Guardian

Why are we still pretending 'trickle-down' economics work?

All in all, in summary, supporters of trickle down often cite the work of the ‘mad’ Arthur Laffer as proof that the theory works. Laffer said tax cuts for the wealthy had a powerful multiplier effect and any revenues lost by governments from reducing tax rates would be more than compensated for by the fruits of higher growth. Given the evidence today everywhere and in particular in the US and the UK, one can only say: What a load of RUBBISH!!

In practice, as Larry Elliott writing in the Guardian has candidly noted: ‘trickle down did not go according to plan. Reagan and Bush slashed tax on higher earners but inequality soared: between 1979 and 2005 the incomes of the Top 1% of earners tripled while those of the bottom 20% rose by just 6%. It was more a case of trickle up than trickle down.

Moreover, Reagan’s combination of tax cuts for the rich and a big increase in defence spending resulted in a threefold increase in US federal government debt between 1981 and 1989. The US economy grew strongly in the latter years of Reagan’s presidency, but this was a period not just of higher spending on the military but also of cheaper borrowing after the cripplingly high interest rates of the early 1980s.

In a 2015 assessment, the International Monetary Fund rubbished trickle down and said governments should instead focus on policies that would directly help those on low and middle incomes.

‘I am sick and tired of trickle-down economics. It has never worked. We're building an economy from the bottom up and middle out.’

So there you have it, the mad, bad economists, fooling and stupefying the mad, bad politicians to destroy the world!!

Below you can read more on how the Mad, Bad Politicians may be able to change and become Good. I know, it is a tall order, but it is possible.

My Plea to Liz Truss: Our Country Needs Caring, Healing and Transformation

Boris Johnson: This is How to Become a Force for Good

…And now after over 40 years of the ‘Horror Show’ of Thatcherism, experimenting with a mad, bad ideology of tax-cutting and destroying public services on the British people, we are told that if we want decent public services, then, there is no alternative, Taxes Must Rise and Benefits Must be Cut!!

I believe that they call this AUSTERITY, a crime inflicted on the British people not long ago by Cameron and Osborne duet!!

M.B. Although I very much support taxing the rich individuals in general and super rich business corporations in particular, I believe that further cuts to welfare expenditure, public services, and more are abhorent and are indeed crimes against humanity.

And now, once again, the  incompetent, discredited Tories are about to inflict the people with more pain and misery with yet a new austerity!

It fits the definition of madness to propose more austerity.