What Is Life? What a Moving Story- Sir Paul Nurse

'Paul Nurse is a geneticist and cell biologist who has worked on how the eukaryotic cell cycle is controlled. His major work has been on the cyclin dependent protein kinases and how they regulate cell reproduction. He is Director of the Francis Crick Institute in London, and has served as President of the Royal Society, Chief Executive of Cancer Research UK and President of Rockefeller University.

He shared the 2001 Nobel Prize in Physiology or Medicine and has received the Albert Lasker Award, the Gairdner Award, the Louis Jeantet Prize and the Royal Society's Royal and Copley Medals. He was knighted in 1999, received the Legion d'honneur in 2003 from France, and the Order of the Rising Sun in 2018 from Japan. He served for 15 years on the Council of Science and Technology, advising the Prime Minister and Cabinet, and is presently a Chief Scientific Advisor for the European Union and a trustee of the British Museum'.-Photo: The Francis Crick Institute

Sir Paul in conversation with Andrew Anthony , The Observer*

The Nobel prize-winning scientist on Covid-19, the burden of Brexit, his astonishing upbringing and terrible failures at French

Your book is a reminder of the fundamental importance of cells. Do you think cells have been overshadowed by genes in the public imagination?

I’m a geneticist, so I’ve lived through molecular genetics and molecular biology and that has focused a lot on genes. I do think cells have not caught the attention of the world in perhaps the way they should have done, because it’s the fundamental unit of life. I sometimes use this analogy: it’s like biology’s atom. It’s not the gene, it’s the cell.

During the Covid-19 crisis, you’ve been critical of ministers and advisers, comparing them to blancmange. Do you think we need to rethink that relationship between politicians and advisers?

Yes, I do. I’m particularly concerned about the attempt to convey communication through one-liners such as “we’re following the science”. It’s a sort of populist tendency and that reduces complex situations to an almost meaningless sentence. I also think we need more clarity about how decisions are made. For example, testing for coronavirus was absolutely critical. What they decided to do was produce very big labs to do it, not thinking that this would take many months to get it to work efficiently. Whereas they could have developed it locally and contributed something immediately. All the testing capacity basically did nothing during the big infection phase. That was very bad policy and implemented badly, but we didn’t see the discussions behind those decisions.

Another area of concern for you is the effect of Brexit on the science community. Do you see any cause for optimism there?

Not really. There are three major science blocs in the world, which are North America, China and the far east and Europe. Britain is actually good at science and had a lot of influence in European science. And so we have lost power and influence. That’s a political thing. The psychological thing is that I meet scientific colleagues around the world and they just think that the UK has turned away from collaborative science by looking back on an imperial history that no longer exists. It’s just very sentimental. And we’ve taken a leap several decades into the past.

You mention an extraordinary personal story in the book: that you found out that your sister was actually your mother. How has it affected your sense of identity?

I was in my late 50s when I found out. I was living in New York and I was president of a research university called Rockefeller University. I applied for a green card and was turned down, which was a bit of a surprise because I had a Nobel prize, I was president of a university and I was knighted. It was because they didn’t like my birth certificate, which didn’t name my parents. So I applied for a full birth certificate and discovered the truth. I’m astonished that my parents, who were my grandparents, managed to keep this all quiet. As my actual mother and grandparents were dead, I had no recourse to find out exactly what happened. I would like to know who my father is. I mean, I’m a geneticist. I’m actually quite a good geneticist. And I lived for half a century not knowing my own genetics. I hope I find out before I eventually die.

Your main area of research is in yeast, but you became head of Cancer Research UK. How far away do you think science is from gaining some cellular grip on cancer?

Our understanding of cancer has really dramatically improved. We understand the cellular basis of it, the genetic origins of it, the ways in which it’s caused, the way in which the regulatory circuits get altered in cancer cell tissue, which is immensely complicated and one reason it’s so difficult to develop therapies. Our treatment of it is still lagging but in my view we will be able to get cancer under significantly more control in a matter of decades, though we’ll never be able to eliminate it.

You famously failed your French O-level six times. What are your linguistic skills like these days?

They are absolutely appallingly bad. It’s a matter of great distress to me because I travel a great deal. I even got a Légion d’honneur, believe it or not. I had to give the speech in French! You needed a foreign language to get into university, so they let me sit French six times. I didn’t pass so I worked as a technician for a year. And then eventually I was let into Birmingham University.

What did it mean to you to win the Nobel prize?

The Nobel prize is the prize that everybody knows. I was fortunate that I got it on the 100th anniversary of the Nobel, so it was a great occasion. The fact is that I do talk more to the public and journalists now and it’s mainly because of the Nobel prize. Suddenly you become a public figure. You have to be careful you don’t say anything too stupid. In some countries such as India or China it’s a huge distinction, even in Germany and France. In the UK, we don’t tend to see it like that so much. In some ways, I think that’s a good thing.

See also: Sir Paul Nurse: 'I looked at my birth certificate. That was not my mother's name' 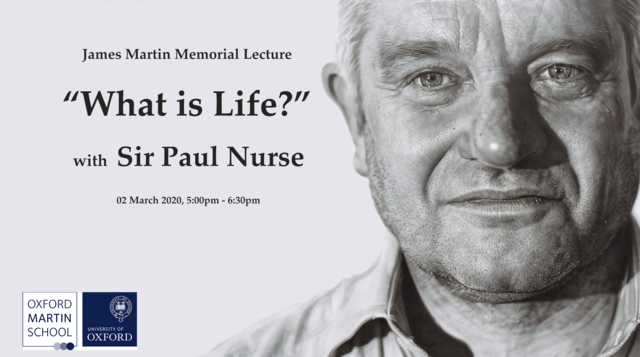 “What is Life?” with Sir Paul Nurse: Watch the Video