‘Down With Élites! How Rousseau Predicted Trump’ 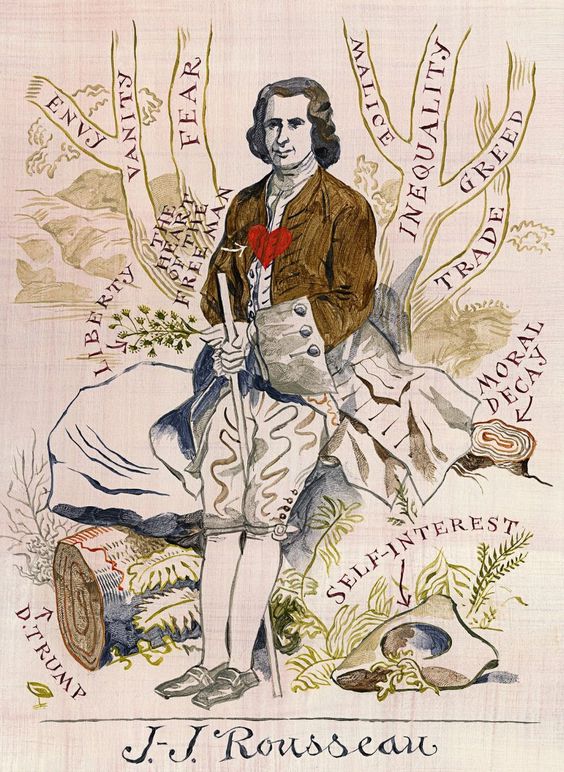 'Rousseau’s lowly background made him the Enlightenment’s great outsider.'

ILLUSTRATION BY JEFFREY FISHER, Via The New Yorker

…’Rousseau “the most original genius of his age—so original that most people at the time could not begin to appreciate how powerful his thinking was.”- Leo Damrosch in his biography of Rousseau “Restless Genius” (2005)

…’that a society built around self-interested individuals will necessarily lack a common morality.’- István Hont, in “Politics in Commercial Society,” a comparative study of Rousseau and Adam Smith.

The economic losers, the ‘left-behind’ have revolted against the elites everywhere 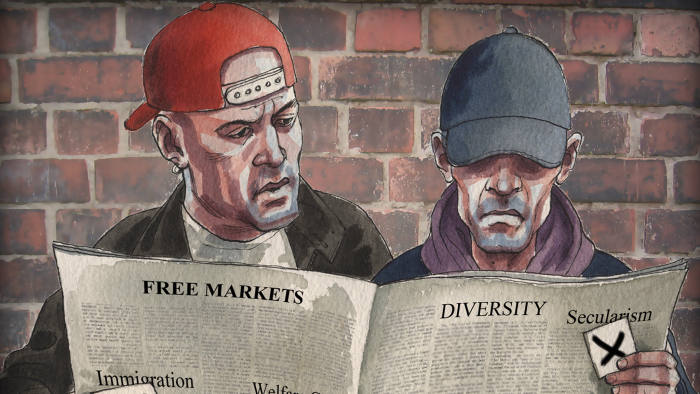 ‘The projects of the rightwing elite have long been low marginal tax rates, liberal immigration, globalisation, curbs on costly “entitlement programmes”, deregulated labour markets and maximisation of shareholder value. The projects of the leftwing elite have been liberal immigration (again), multiculturalism, secularism, diversity, choice on abortion, and racial and gender equality. Libertarians embrace the causes of the elites of both sides; that is why they are a tiny minority.’- Martin Wolf, Financial Times, 26 January 2016 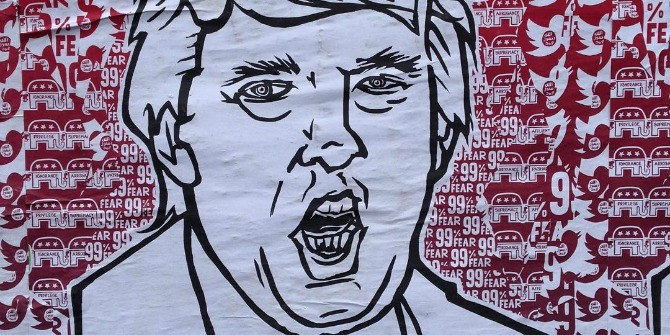 'In the course of nearly twenty books, Rousseau amplified his objections to intellectuals and their rich patrons, who presumed to tell other people how to live. Rousseau did share a crucial assumption with his adversaries: that the age of clerical tyranny and divinely sanctioned monarchy was being replaced by an era of escalating egalitarianism. But he warned that the bourgeois values of wealth, vanity, and ostentation would impede rather than advance the growth of equality, morality, dignity, freedom, and compassion. He believed that a society based on envy and the power of money, though it might promise progress, would actually impose psychologically debilitating change on its citizens.’

‘The triumphs of capitalist imperialism in the nineteenth century, and of economic globalization after the Cold War, fulfilled on a grand scale the Enlightenment dream of a worldwide materialist civilization knit together by rational self-interest. Voltaire proved to be, as Nietzsche presciently wrote, the “representative of the victorious, ruling classes and their valuations,” while Rousseau looked like a sore loser. Against today’s backdrop of political rage, however, Rousseau seems to have grasped, and embodied, better than anyone the incendiary appeal of victimhood in societies built around the pursuit of wealth and power.’

‘The recent explosions of resentment against writers and journalists as well as against politicians, technocrats, businessmen, and bankers reveal how Rousseau’s history of the human heart is still playing itself out among the disaffected. The Jacobins and the German Romantics may have been Rousseau’s most famous and influential disciples, but Rousseau’s claim that the metropolis was a den of vice and that virtue resided in ordinary people makes for a perpetually renewable challenge—from the right and the left—to our imperfect political and economic arrangements. It is the uprooted people with Rousseau’s complex wounds who have periodically made and unmade the modern world with their demands for radical equality and cravings for stability. There will be many more of them, it is safe to say, as billions of young people in Asia and Africa negotiate the maelstrom of progress.’

‘I love the poorly educated,” Donald Trump said during a victory speech in February, and he has repeatedly taken aim at America’s élites and their “false song of globalism.” Voters in Britain, heeding Brexit campaigners’ calls to “take back control” of a country ostensibly threatened by uncontrolled immigration, “unelected élites,” and “experts,” have reversed fifty years of European integration. Other countries across Western Europe, as well as Israel, Russia, Poland, and Hungary, seethe with demagogic assertions of ethnic, religious, and national identity. In India, Hindu supremacists have adopted the conservative epithet “libtard” to channel righteous fury against liberal and secular élites. The great eighteenth-century venture of a universal civilization harmonized by rational self-interest, commerce, luxury, arts, and science—the Enlightenment forged by Voltaire, Montesquieu, Adam Smith, and others—seems to have reached a turbulent anticlimax in a worldwide revolt against cosmopolitan modernity…’Continue to read: - Pankaj Mishra, How Rousseau Predicted Trump, in The New Yorker, 1 August 2016

A selected of similar readings for your interest:

Rousseau was noted above. Below is a reflection on Adam Smith

‘While they differed in many ways, both Rousseau and Smith were acutely interested in the relationship between rich and poor that was emerging in 18th century commercial society. Both argued that growing inequality threatened to undermine social harmony. And their respective analyses diverge in ways that are useful in understanding Trump's appeal.

‘Adam Smith is best known today as the godfather of the modern free-market system, as outlined in his "Wealth of Nations." But Smith built his academic reputation on his 1759 treatise, "Theory of Moral Sentiments," which aimed to understand what motivates individual behavior, known as the study of moral psychology. In a fascinating passage, he notes a reverence for the rich that borders on obsequiousness. He claims that it is the inclination of many common people "to admire, and almost to worship, the rich and powerful." Elsewhere in the same treatise, he writes that the material benefits of the upper class "can extend but to a few; but their fortunes interest almost everybody."

‘Smith reasons that most people assume that the wealthy and powerful have great talent and efforts-and that we imagine that with a little more effort on our part, we could be just like them.

‘To be sure, there have been plenty of other wealthy presidential candidates. But none has made his or her wealth so central to the candidacy, citing personal fortune as a primary qualification. Trump repeatedly sells himself as being worthy specifically because he is worth, he claims, "more than $10 billion." Smith argues that this kind of wealth, especially in ostentatious display, garners wide admiration. In this view, Trump's populist statements are mere window-dressing for his greatest asset: his assets.

‘Smith did not consider this admiration for the rich to be a virtue. Indeed, he worried that an instinctive love of the wealthy was "the great and most universal cause of the corruption of our moral sentiments." He argued that it fuels the already substantial vanity of the rich and the unmerited shame of the poor. This vanity would persuade the rich that they were above the laws, which could inspire the poor to abandon their admiration for the rich and take up arms against them…’- Continue to read 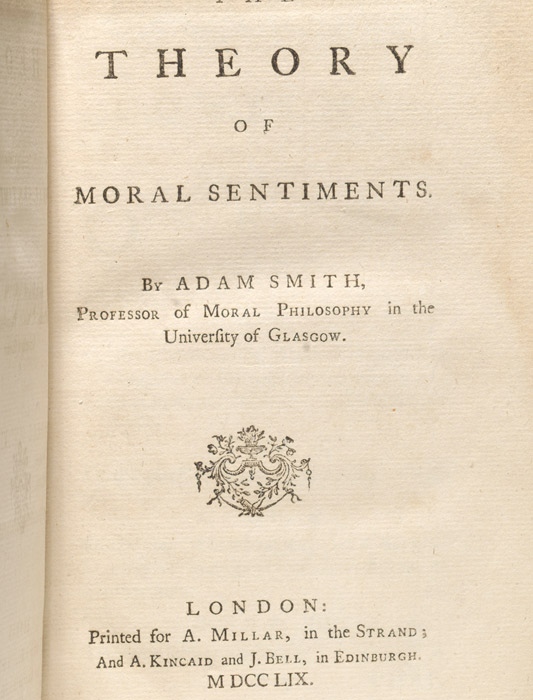 SMITH, Adam. The Theory of Moral Sentiments. London: Printed for A. Millar, in the Strand; A. Kincaid and J. Bell,

Adam Smith and the Pursuit of Happiness