A Joy Forever: John Keats' poetry lives on 200 years after his death

(A Celebration of Beauty, Love, Mother Nature and Life)

'It's hard – no, it's impossible – to think of another writer who suffered and achieved so much in such a short time at such an early age...

'The man we discover is fierce in his dislikes, generous in his friendships, passionate in his loves.'-Sir Andrew Motion, Poet Laureate, 1999 to 2009

‘The loveliest and the last,

The bloom, whose petals nipped before they blew

Died on the promise of the fruit.’- Percy Bysshe Shelley, ‘Adonais: An Elegy on the Death of John Keats.’ 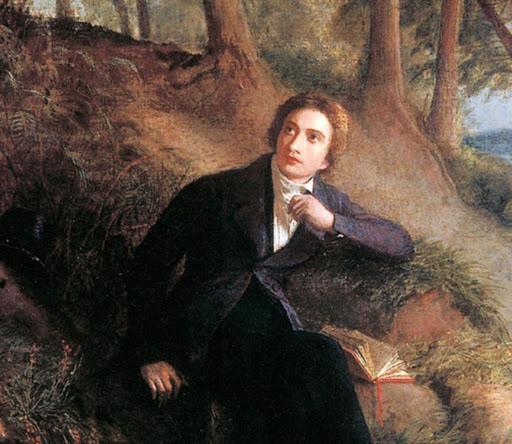 Joseph Severn's painting of Keats 'Listening to the Nightingale on Hampstead Heath',

‘Teenagers often discover poetry through Keats because he was so romantic and tender and evocative of the emotions he was feeling at the time.

You feel tearful at the sadness of knowing that he died so young, yet his poems celebrate life and beauty and have a wonderful sense of joy.’- Judith Chernaik

‘John Keats was only in publication for four years before his death from tuberculosis at the age of 25 - but he made a significant mark on the world. In his short life the English Romantic poet became a major figure in the world of poetry alongside Byron and Shelley.

Like many greats, Keats was not well received by critics when he was alive, but by the 19th century had become one of the most beloved English poets.

Born in Moorgate, London in 1795, Keats lived for just 25 years. It is thought he contracted the tuberculosis that killed him soon after a walking tour in 1818.

Five of his six great odes were composed at Wentworth Place - where he lived from 1818 -  including Ode to Psyche and Ode to Nightingale. 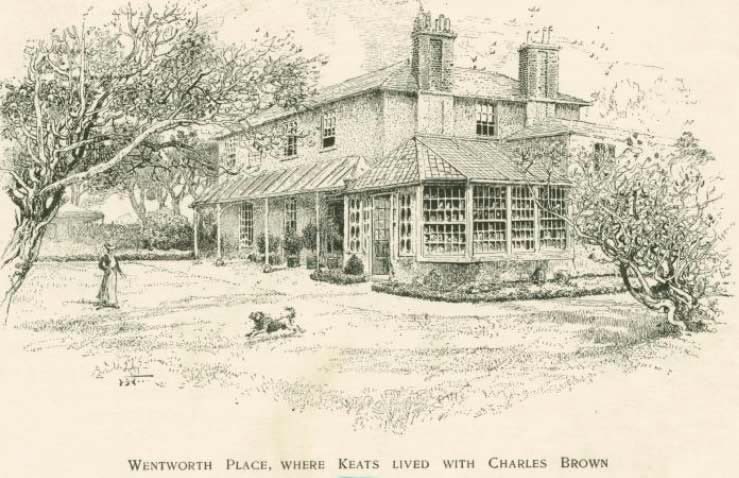 The tuberculosis finally took hold while living at Wentworth in 1819 and it was advised by doctors he seek a warmer climate to ease the condition. Keats moved to Rome knowing he'd likely never see England, or his love Fanny Brawne, ever again and felt unable to write to her during this time.

He died five months after the move to Rome - finally succumbing to the condition on February 23, 1821 - although his tombstone wrongly cited his death as February 24, 1821.’*

'I can feel the cold earth upon me – the daisies growing over me – O for this quiet – it will be my first.'

Keats gave instructions for his headstone to be engraved with the words “here lies one whose name was writ in water”, and visitors to Rome’s Protestant cemetery can still make a pilgrimage to see it today. But far from being “writ in water”, Keats’s words continue to echo, with a host of writing and events lined up to mark the 200th anniversary of his death. 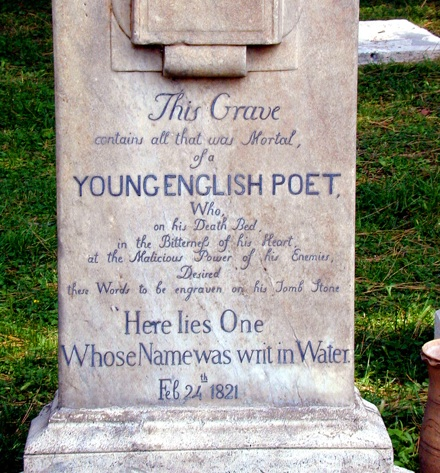 Keats’ tombstone is engraved with the following lines:

'This grave contains all that was mortal, of a young English poet, who, on his death bed, in the bitterness of his heart,

at the malicious power of his enemies, desired these words to be engraven on his tomb stone-

HERE LIES ONE WHOSE NAME WAS WRIT IN WATER.'- Photo:The Wordsworth Trust

“Over the 200 years Keats’s reputation has continued to soar, while that of some of his contemporaries have risen and fallen. His early death, doomed love, appealing personality, handsome looks and approachable and luxuriant poetry have caught the imaginations of generations,” said Angus Graham-Campbell, a playwright and academic whose play Writ in Water, telling the story of Keats’ final weeks, will be broadcast on BBC Radio 4 on 23 February. “His reputation will continue to rise.”...Continue to read: A joy forever

'It's hard – no, it's impossible – to think of another writer who suffered and achieved 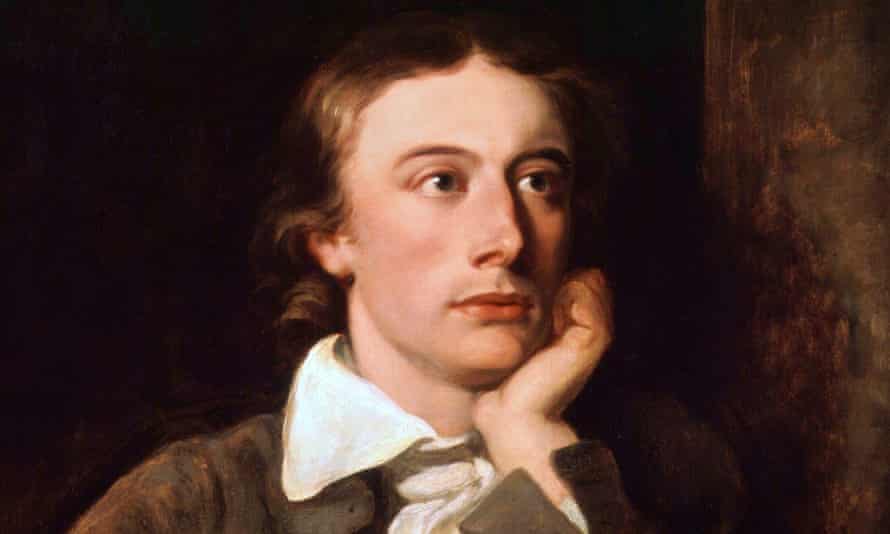 'The man we discover is fierce in his dislikes, generous in his friendships, passionate in his loves.'

‘The story of John Keats has an irresistible pathos: the humble origins; the early death of his father; his mother's disappearance, reappearance, illness and (again) early death; the noble labours as a trainee doctor; the even more noble aspirations as a poet; the peerlessly precocious flowering (he was 23 when he wrote most of the great poetry); the appalling illness; the courage with which he endured it; the tragic journey to Rome; the miserable end. It's hard – no, it's impossible – to think of another writer who suffered and achieved so much in such a short time at such an early age.

These things alone are enough to make Keats seem heroic. But while they instantly catch our attention and keep our sympathy, they can also detain us in a way that blinds us to the actual texture of his personality – his everyday self; the self that lived beneath and within the tragic narrative of his circumstances.

This is where his real heroism resides. We can see it, of course, in the poems – in their profound concern for the deepest questions in life (what is suffering for? How can art help us enjoy and endure? How much does love weigh compared to death? ). We can find it even more clearly in his letters, which by their nature allow us to hear Keats's speaking voice – because their comparative informality encourages him to produce a different kind of immediacy.

The man we discover is fierce in his dislikes, generous in his friendships, passionate in his loves, funny, generous, big-hearted, clever, compassionate, brilliant in his apprehensions about the business of writing, seriously good fun and marvellously well able to combine what we would call highbrow seriousness with japes, larks and capers. If that's not a heroic combination I don't know what is.’

*Andrew Motion is a writer and former Poet Laureate. This article was first published in the Guardian on 13 April 2012: My hero: John Keats by Andrew Motion

Read more on the life of John Keats HERE

The Poetry of John Keats – A Celebration of Beauty, Love, Mother Nature and Life 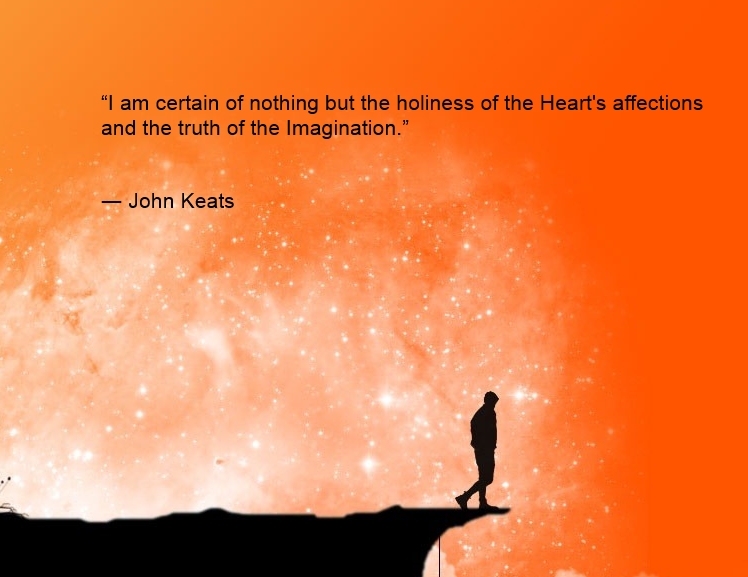 ‘Keats wrote about nature as a source of beauty and as a refuge from the stresses and strains of life in the city.  As a poet who celebrated the five senses, Keats loved nature for its sensuous appeal: flowers, for instance, for their colour, scent and softness; streams for their coolness and for the calming sounds of flowing water.

He describes the natural world with great precision. Over a hundred plant species have been identified in his work, including his odes To a Nightingale and To Psyche. For Keats the world of nature is the closest we can come to an ideal world, a sort of Eden, and is the only real environment that can approach the ideal forms created by the human imagination…’- Continue to read

The Prophets of Love and Beauty

A Selection from our Archives 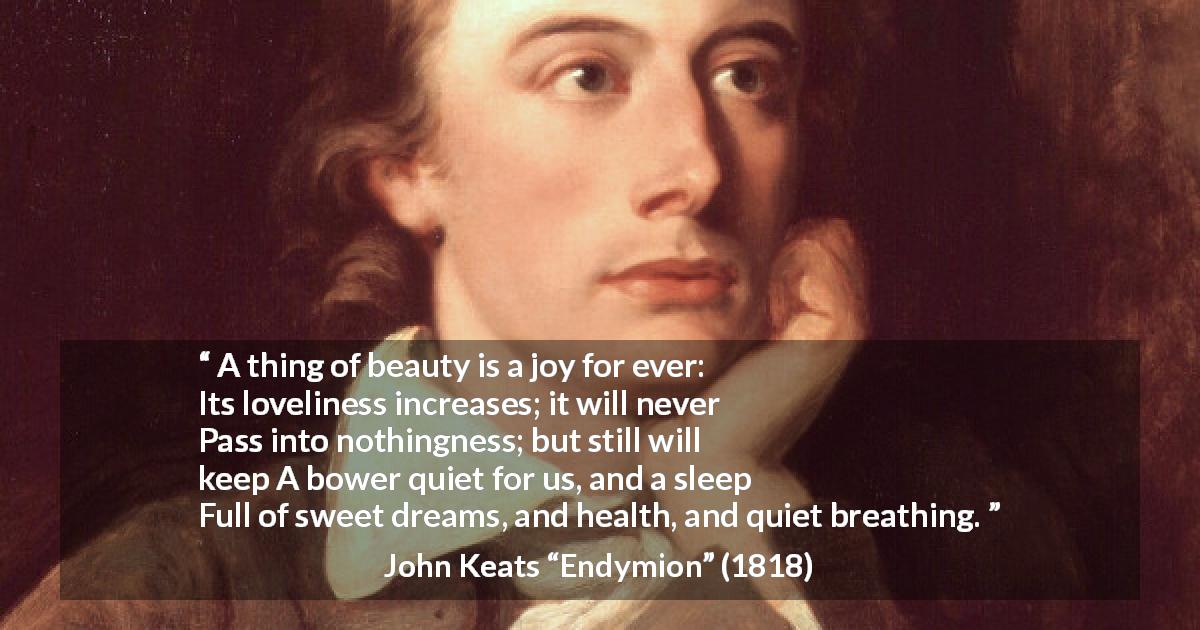 Nature is the model to teach business how to thrive

My Poem of the month (November): Reimagined Garden

My Poem of the month (December): The Emerging of a New Consciousness and Hopefulness

My Poem of the month (February): Let Hope and Healing Begin to Brighten the Covid Darkness

Detaching Nature from Economics is ‘Burning the Library of Life’