Thatcherism- the poisonous ideology that became the global norm 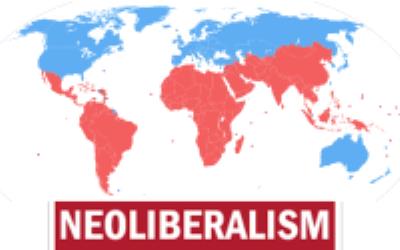 Photo: Neo-Liberalism: The Ideology At The Root Of All Our Problems

Lest we forget: We are in the midst of the third great economic collapse since the Second World War: all three have taken place since Thatcherism launched its great crusade

“Thatcherism was a national catastrophe, and we remain trapped by its consequences. As her former Chancellor Geoffrey Howe put it: “Her real triumph was to have transformed not just one party but two, so that when Labour did eventually return, the great bulk of Thatcherism was accepted as irreversible.”

We are in the midst of the third great economic collapse since the Second World War: all three have taken place since Thatcherism launched its great crusade. This current crisis has roots in the Thatcherite free market experiment, which wiped out much of the country’s industrial base in favour of a deregulated financial sector…

It is certainly true that there were more people languishing in long-term unemployment last year than there were in all forms of unemployment 40 years ago. In large part, this is a consequence of Thatcherism’s emptying communities of millions of secure, skilled industrial jobs. Large swathes of Britain – mining villages, steel towns and so on – were devastated, and never really recovered. Even when Britain was supposedly booming, the old industrial heartlands had high levels of what is rather clinically described as “economic inactivity”.

Five million people now languish on social housing waiting lists, while billions of pounds of housing benefit line the pockets of private landlords charging rip-off rents. The scarcity of housing turns communities against each other, as immigrants or anyone deemed less deserving are scapegoated. But the guilt really lies with the Thatcherite policy of right-to-buy and failure to replace the stock that was sold off.

We could go on. Britain was one of the most equal Western European countries before the Thatcherite project began, and is now one of the most unequal. Thatcherism is not just alive and well: it courses through the veins of British political life. The current government goes where Thatcherism did not dare in its privatisation of the NHS and sledgehammering of the welfare state.

The challenge ahead is the same as it was yesterday: to tear down the whole edifice of Thatcherism, heal Britain of the damage done, and build a country run in the interests of working people. It’s a fight we must all fight. The champagne is on ice until we win it.”

Owen Jones: Thatcherism was a national catastrophe that still poisons us